A downloadable game for Windows and Linux

You work at GEB Observatory - where 3 new species, all hivemind colonies, have recently been discovered. Researchers are excited to begin work investigating, but there's one small problem

The colonies are on the brink of extinction, and danger lurks in the world they inhabit.

Keep the Cyan, Magenta, and Yellow colonies alive for as long as possible. Give them food, clear a path through the forest, and block off those who would steal their resources.

[WASD] or [MOUSE4] to move the camera

[MOUSE1] to place food on the map

[MOUSE2] to place trees on the map

[MOUSE3] to clear a tile on the map

[C] to enable cheats. This disables cooldowns and prevents colonies from dying out

Unzip and run the hivemind.exe executable

I was able to build the game for MacOS after fixing a typo in Cargo.toml

But I made a note to come back and test on a PC with a proper mouse.

thank you! As you can probably see from the commits, I was flailing trying to get the Mac release ci to work at the last minute haha

An RTS with highly asymmetric factions, which only interact indirectly with each other and the player.

1. A collective hivemind, communicating via a complex system of fields, similar to the attractor and repellent pheromones used by ants. They search for resources and find paths through the maze-like forest, and their colony requires a constant supply of resources to stay alive.

2. An ever expanding, self replicating circuit. It grows exponentially, scanning the world around it and consuming everything in it's path.

This expansion is unstoppable. Inevitable. One might even say the circuit has an 'Unfair Advantage'.

It's only matter of time until there's nothing left on the map, and your goal is to keep all of hivemind colonies alive as long as possible.

Fully simulated drones and colonies, inspired by the real life behavior of ants and bees. The drones sense nearby food, signal it's location to allies with attractor signals, and encourage others to spread out and search elsewhere when food is depleted via repellent signals.

An implementation of self replicating AI with a discrete internal clock. Each tick, it scans the world and finds optimal paths to new resources.

Simulated interactions between up to 50k entities, with variable simulation speed.

An illustrated and animated isometric, tile-based game world. All art created just for this game jam!

3. Hexels and Aseprite for sprites and game art 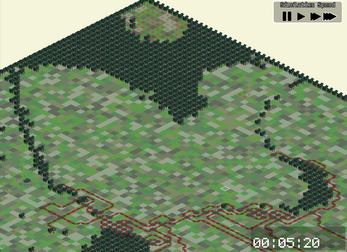 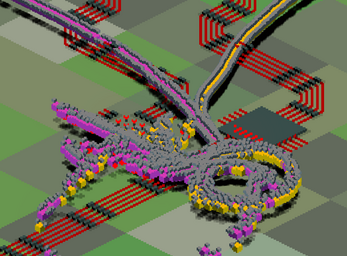 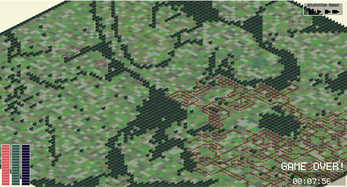